Ruth and I were at the Moseley Folk Festival all day Saturday and Sunday was spent tobogganing for Oliver’s birthday – I still can’t believe he’s 5! I’d rested the knee somewhat in terms of running but I was still hobbling around for most of the weekend and on my feet all day.

I decided not to run on Monday. The knee had improved somewhat but there was still an underlying issue when I put weight through it, more so when I stretched it out or put my full weight on it leaning forward – particularly down stairs. The pain wasn’t unbearable, far from it, but there was definitely a niggle which was causing me issues.

The sensible me, and the advice I’d give to others would have been rest, ice and get a physio appointment asap. In reality, I was in week 16 of the training plan. The PEAK phase. I should be recording 50 miles this week and here I am with a dodgy knee! I couldn’t afford to take any time off. I could probably get away with reducing the miles but I needed to keep the legs ticking over.

I grabbed my gear and went for a run on Tuesday.

The first mile was uncomfortable and the knee felt like it was jarring on every foot strike. It’s difficult to explain but it’s similar to that feeling in your fingers when they need cracking (or is that just me?), except the knee wouldn’t crack. The more I ran though, the less discomfort I felt. I kept the pace steady and ran a 5.6 mile loop around the streets of Bromsgrove.

I woke up on Wednesday and thankfully the knee felt ok. Not perfect but ok. I’d kind of told myself that after my run on Tuesday that if there was any sign of it feeling worse then I’d have the difficult decision to make of resting and getting some professional help. If on the other hand it didn’t feel any worse then I’d grit my teeth and get on with it, which is what I did…

I was off work on Wednesday and Thursday as Oliver had his induction week at school between 9:15 and 11:45. This gave me a couple of hours to get a short run in. With the knee in mind, I kept the run local and decided to do a hills session not far from where I live…again, dodgy knee + hill reps – I’m my own worst enemy sometimes! Nonetheless, it held up well and I actually really enjoyed it.

I did a double run on Thursday. I’d posted on the club Facebook page that I’d be running my usual 10k route in and around the Lickey Hills on the evening, to which a few people had agreed to join me. That was scheduled for the evening. Whilst dropping Oliver off at school on Thursday, I bumped into my mate Tom who suggested a short run whilst we were ‘child free’. Sod it I thought, back-to-back running was good for the training plan. Toms not long returned from injury himself so the pace was steady and we enjoyed a really nice 3.4 mile run.

I met up with the Kings Heath group at 7pm in the Lickey Hills. It had been a while since I’d run the hills and really enjoyed it – although I may have gone a little off piste and got slightly ‘lost’. No harm done, although by the last mile it had got dark, not helped by the shade of the tree canopy. Note to self: head torches needed on the next run!

I took Friday as a rest day on the basis of running back-to-back on Thursday.

For my 40th Birthday back in May, Ian and Naomi had enrolled me on a Navigational Training Course with Due North Events in the Lake District on Saturday. The LiaD requires you to self navigate and being a city boy (I got lost in the Lickey Hills yesterday don’t forget!) my navigational skills are lets say, not the best!

The course started at 9am in Pooley Bridge which meant an early start. A very early start. I’d packed my things the night before so I set the alarm for 4:30, showered, grabbed my gear and left the house just before 5am. Despite the M6 being closed for a couple of junctions, the journey up was pretty uneventful and I arrived at the meeting point for just before 9am.

I met up with the course leader, Mel (who’s completed the Bob Graham Round btw! – legendary status in my eyes) and four other people who were enrolled on the course. It was a great group which made for a fun, enjoyable day. We spent the first hour indoors learning all about map reading, contours, scales, legends etc, then we went out into the fells to put it all in practice. I had an amazing day and can’t recommend the course highly enough. We covered approximately 8 miles in the fells, navigating to various points, taking a baring and generally had a great time. It also gave me the confidence to be able to self navigate in the fells if needed during the LiaD.

As I was up North, I’d agreed to stay at Ian’s overnight and recce the last 20 miles of the LiaD route – the supposedly ‘flat’ section from Ambleside to Cartmel (miles 30-50 during LiaD). It was also part of the route we’d most likely be running at night in the dark so some familiarity would be essential. We’d agreed on another early start so left at 6.30 am in separate cars, both driving to Cartmel whereby we left Ian’s car before driving back to Ambleside in my car as it was a linear route. We started the run at 9am. Shamelessly to say, I took some Ibruprofen to hide any knee pain and we went on our way…

I won’t go into too much detail with regards to the run as I’ll do a full race report when (if) I complete it in 5 weeks time. But what I will say is that as far as navigation goes it shouldn’t cause too many issues but it was far hillier than we had both expected; with just over 3,200 ft of elevation.  Plus we ran it on fresh legs. On the day we’d have already covered 30 miles with over 11,000 ft of elevation! Shit! It just goes to show the enormity of the task in hand! 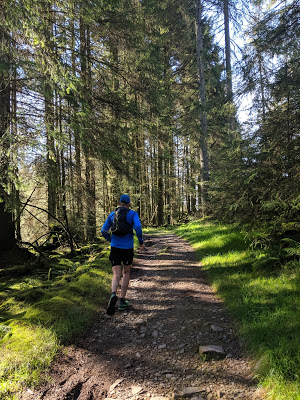 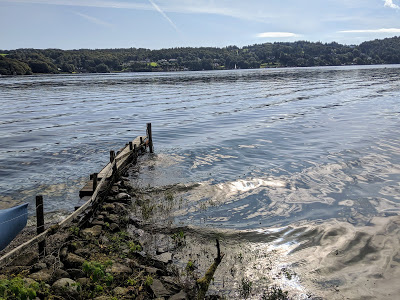 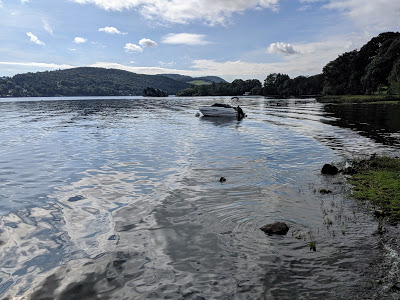